Here is a message from a friend of mine:

Human rights advocate and abuse witness Sarah Smith dressed as a Christmas Angel to make a plea for refugees to Prime Minister Malcolm Turnbull at his private Sydney Harbour residence at 6pm on Christmas Eve.

Accompanied by like-minded friends, Ms Smith handed over a white box containing images of over 30 offshore detainees witnesssed to have suffered psychological harm through trauma, long-term incarceration, loss of life options, beatings and sexual abuse by guards at Australian-run detention centres and in the community of their sweltering island prisons. Each photo is captioned with a brief description of the detainee’s specific strengths and suffering.

“These people are to be treasured, celebrated, honoured and welcomed, said Ms Smith.

Iranian school student Mogjan Shamsalipoor is a particular friend of Ms Smith. Having survived child rape and and fled arranged marriage at 17 to a man of 60, Mogjan lived for 2 years in Brisbane. There she studied and married her high school sweetheart before Immigration Minister Dutton had her detained without explanation.

Tonight the box of photos and a message of goodwill towards all boat arrivals was reluctantly accepted by Federal Police who opted for a silent night. Carol singing was discouraged outside the Prime Minister’s mansion. It is unclear whether the Turnbull family was with-inn but it is known that there are rooms to spare.

“It is to be hoped that Australia’s Prime Minister is no Herod and reveals his compassionate nature early in 2016, rolling back the turnback policies and allowing flights to alternative countries (such as Canada or New Zealand, still offering to take detainees) or community support for asylum seekers on the Australian mainland,” said Ms Smith.

“These people are enterprising, have deep insight and far more to give than most wealthy immigrants we welcome. It is hard to feel Christmassy while our country causes detainees further harm”, she concluded. 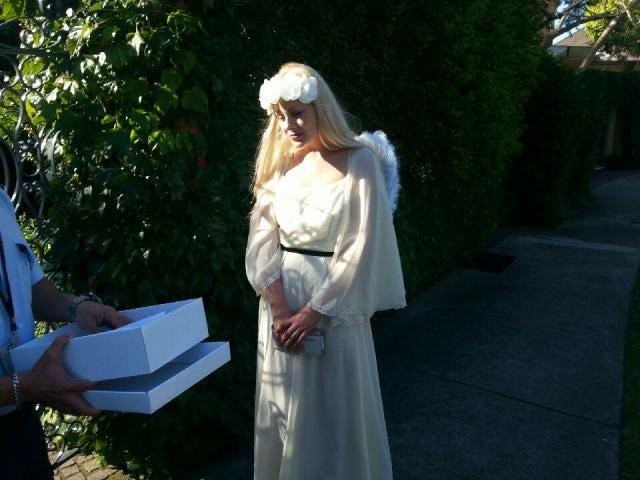