A Bit About Words: Punctuation

Punctuation holds only limited interest for most people, but it makes reading easier and it makes it easier to convey precisely the sense intended.  It has been defined as “The practice, action, or system of inserting points or other small marks into texts, in order to aid interpretation; division of text into sentences, clauses, etc., by means of such marks.”

Punctuation can be vital in understanding a sentence.  Sir Roger Casement was tried for treason in 1916.  The prosecution was brought under the Statute of Treasons (1351).  Punctuation did not exist back then.  The relevant provision was in Norman French, but its English translation reads:

What Casement had done was done entirely outside England.  The question of interpretation can be shortly stated:  is it treason to adhere outside the realm to the King’s enemies?  In other words, do the words or elsewhere qualify only the words which immediately precede them, or do they qualify the entire phrase be adherent to the enemies of our Lord the King in his realm giving to them aid and comfort in the realm?  The question was: if it had been punctuated, where would the comma have been?  Casement was famously said to have been hanged by a comma.

Punctuation can be important.

And there is a story about the House of Commons: one Honourable member had referred to another Honourable member as a liar.  The Speaker ordered him to apologise.  He said: “I called the Honourable gentleman a liar it is true and I am sorry for it.  He may provide his own punctuation.”

These days, there are commonly thought to be 12 punctuation marks, apart from spaces: full stop, comma, semicolon, colon, question mark, exclamation mark, dash, hyphen, brackets, apostrophe, and quotation marks.  To this I would add the ellipsis.

The first and second editions of Fowler’s Modern English Usage do not have an entry for punctuation, but rather an entry for stops, and a separate entry for ellipsis.

Punctuation is useful, and tolerably well-understood, but one punctuation mark, the ellipsis, has an interesting history.   The ellipsis is the little row of 3 dots which tell you that the sentence could go further, and that there is more than has been revealed.  Confusingly, it sounds awfully like an ellipse, which is the slightly squashed form of a circle.  In fact, they come from the same origins. 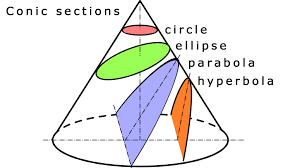 Incidentally, although the diagram does not illustrate it, if a plane cuts vertically down the axis, the resulting section is a triangle, but this is self-evident, trivial and not very useful.

So, the ellipse is the shape you get when a cone is cut off at an angle.  And the ellipsis is a punctuation mark which shows that the sentence has been cut off before it was complete.

Not many people know what the row of dots is called, and most of those who know it is an ellipsis are probably unaware that they are reaching into Euclidean geometry when they use it.

The most commonly used punctuation marks are the full stop, the comma, the question mark and (although some don’t like it) the exclamation mark.

Martin Speckter died on 14 February 1988.  He was an advertising executive during the heyday of advertising and, in 1962, he recognised a gap in the available punctuation marks.  Consider some of the extremes of print advertising:

And so on, endlessly.  They are all propositions in print which are, in form, questions but which are intended to be delivered with such intensity or enthusiasm that an exclamation mark is called for.  And advertising is the field where intense, enthusiastic questions are common.

Speckter decided that a new punctuation mark was needed, which combined the functions of the question mark and the exclamation mark.  The result was the interrobang, which looked like this:

Most of us have notionally used an interrobang in conversation:

“What the…” makes perfect sense with an interrobang as punctuation.

For a time the interrobang interested enough people that it was set in various fonts (including Arial, Calibri, Courier, Helvetica and Palatino.  Remington even released a typewriter which (for an added fee) included a key for the interrobang.  Sadly, the interrobang faded into obscurity before laptop computers became widespread so, although computer fonts are almost endless, and incorporating a new punctuation mark is fairly straight-forward, computer keyboards do not provide an interrobang, even though they provide parentheses, brackets and braces.

That said, if you are using a MS Word on a PC, and choose the Wingdings 2 font, the tilde key gives you this:

Fowler’s 3rd edition treats the ampersand as a punctuation mark.  It has an entry for punctuation, which refers the reader to entries on various punctuation marks, and to an entry on the ampersand.  Impossible! How can it do that?  Unlike the interrobang, the ampersand is found on all modern keyboards, and looks like this: &.  It is not found in Johnson’s dictionary, because it was introduced into English in the early 19th century.  It was widely used (and perhaps popularised) by Fowler, especially in his Modern English Usage, where it is used frequently in place of the word and.  It is an aphetic form of and per se and.  It is a nice irony that Fowler popularised the use of the ampersand, but did not treat it as a punctuation mark, but his 3rd edition (which is much less entertaining than the 1st and 2nd editions) appears to elevate the ampersand to the ranks of punctuation.

And what of marks like the tilde ~, the diaresis (two dots over the second in a pair of vowels, to indicate that they should be separately sounded: Noël)?  The diaresis is often confused with, but should be distinguished from, the German umlaut (two very short strokes above a, o or u which alter the pronunciation of those letters exactly as if the letter is followed by an e).  Along with the cedilla and the familiar accents found in French: acute, grave, circumflex, these are the diacritics: marks which change the way some letters are sounded.

But the ampersand does not perform the normal functions of a punctuation mark or of a diacritic.  Neither does the ubiquitous at sign, @, or the hash sign, #, both of which marks are found on modern keyboards and have rocketed to prominence thanks to social media such as Twitter.  The ampersand is also fairly common on Twitter, because it is one character in place of three.  That can make a difference.

I don’t often disagree with Fowler, but I have trouble thinking of the ampersand as a punctuation mark.  And it is clearly not a diacritic.  I would group it with @ and #, but we need a collective noun for them.  Given their prominence on social media, how about swishtags?